In linguistics a language sound is called a phoneme. The study of all of these sounds are called phonetics. In this first lesson we will look at the sounds of American English.

Everyone knows the 26 letters of the English alphabet:

However, these letters have a problem. You can’t use them to write how words really sound because they all have multiple pronunciations.

Take “a”, for example. Here are just a few examples of words that use “a”, but in each one the “a” has a different sound:

The same thing for “b”. In the second word “comb” the “b” is completely silent.

In fact, every single one of the 26 letters can be pronounced in more than one way. That makes a problem when you hear a word and you want to write down how it is pronounced. Here is an example of different letter combinations that all have the ee of meet sound:

Here is a poem that makes a joke of English spelling and pronunciation:

I take it you already know of tough and bough and cough and dough?
Some may stumble, but not you, on hiccough, thorough, slough, and through?
So now you are ready, perhaps, to learn of less familiar traps?
Beware of heard, a dreadful word, that looks like beard, but sounds like bird.
And dead, it’s said like bed, not bead; for goodness’ sake, don’t call it deed!
Watch out for meat and great and threat.
(They rhyme with suite and straight and debt.)
A moth is not a moth in mother, nor both in bother, broth in brother.
And here is not a match for there, nor dear and fear, for bear and pear.
And then there’s dose and rose and lose – just look them up – and goose and choose
And cork and work and card and ward and font and front and word and sword
And do and go, then thwart and cart, come, come! I’ve hardly made a start.
A dreadful language? Man alive! I’d mastered it when I was five.

So if the English alphabet can’t be used to reliably write the sounds of a word, what is the solution? Use another alphabet?

While some alphabets in the world are better about matching one sound for each letter, there is no alphabet that has enough letters for every sound in the world.

So what is the solution?

The International Phonetic Alphabet (IPA) was made just for the purpose of writing the sounds of a language. Every IPA symbol has only one pronunciation. 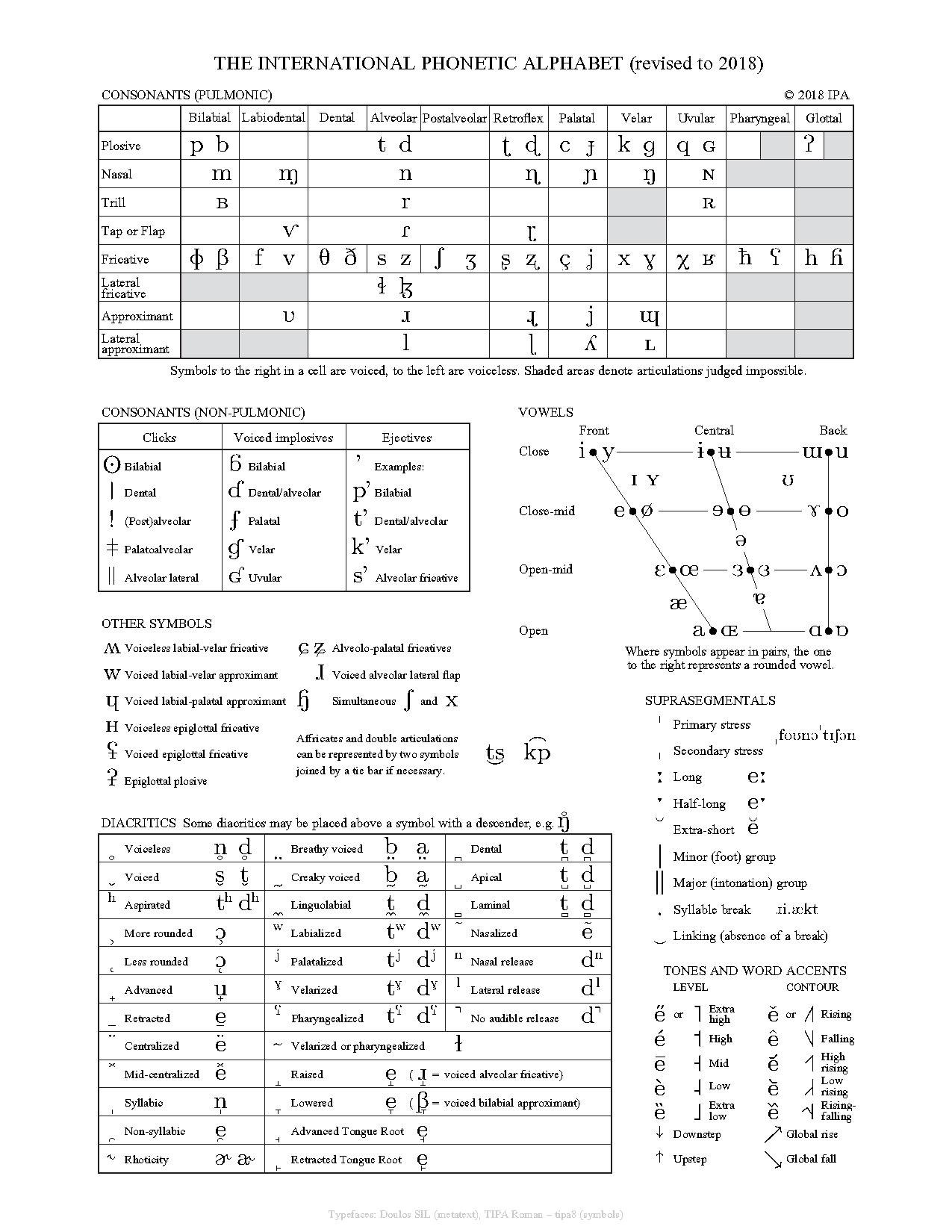 If you would like to hear what each of those symbols sound like, you can find an interactive chart here. If you are interested in knowing the IPA symbols used to write the sounds of the following languages, you can click the links below. This list is not complete of course.

You might be overwhelmed by how many IPA symbols there are. The reason there are so many is that they have to cover every single language in the world. Don’t worry. We aren’t going to learn that many. The symbols used in English are much fewer.

Here are the symbols that we are going to use in this course to write the sounds of American English: 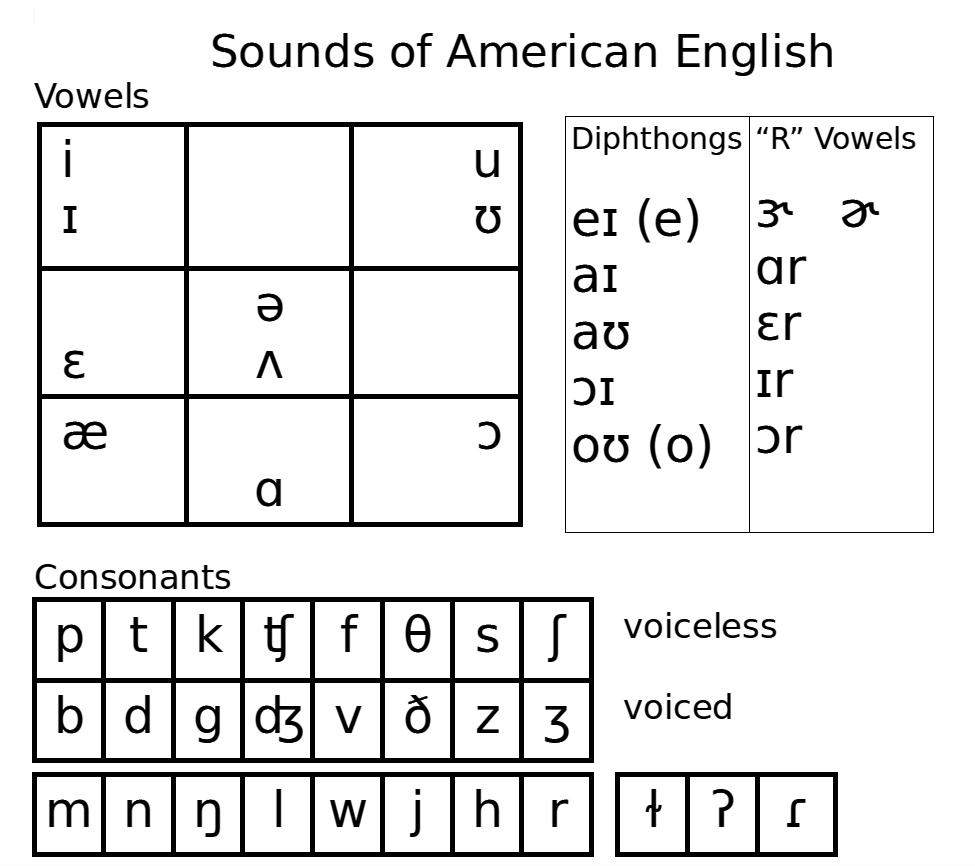 And here are the symbols for British English:

Here is the audio for the vowels. The audio comes from this website:

Note: Some of the symbols used in the charts above for American and British English are not true IPA symbols, but I am using them here because of there common usage in textbooks and dictionaries.

Although Donald Trump differs a little from general American English, this is an interesting comparison.

That’s all for today’s lesson. See you next class.

Copy the symbols for American and British English by hand on paper. Here is an example: 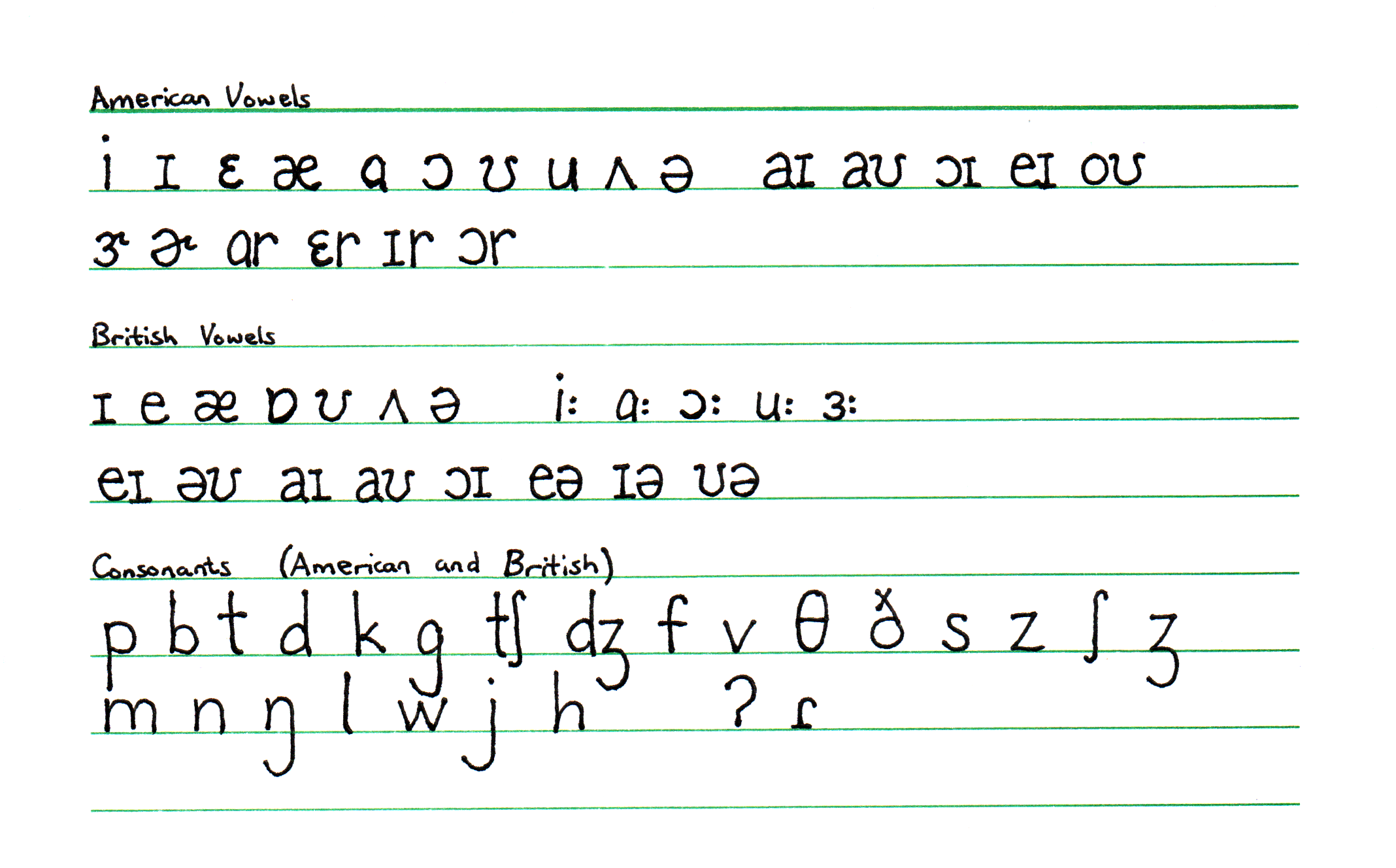